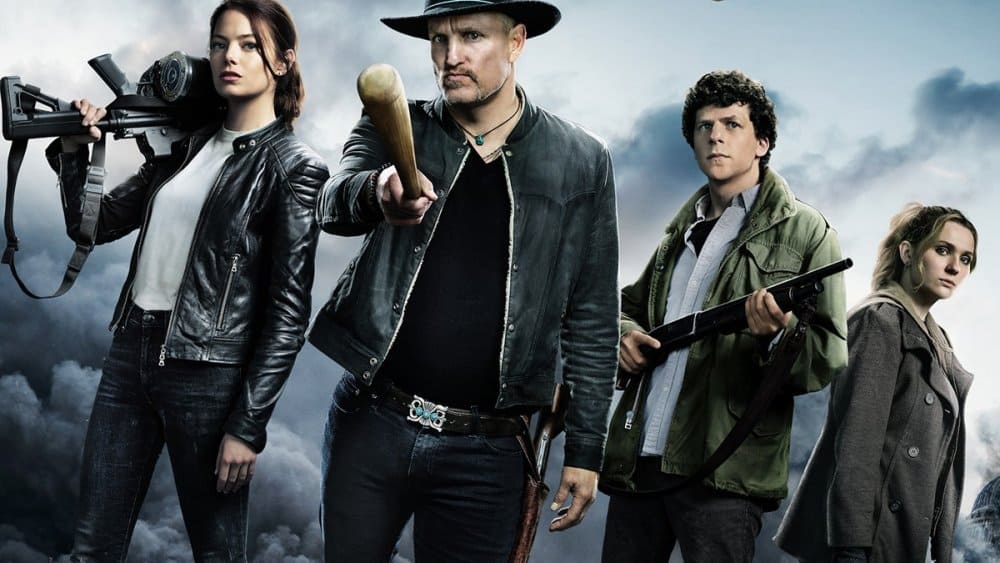 To say the zombie genre has decomposed is an understatement. We’ve had countless movies, video games, comic books and TV series featuring the undead in the last decade and their popularity has reached extreme highs and lows within pop culture properties and hobbies. However now we have the sequel to easily one of the unique films within genre to try and reanimate the sub-genre again. Does it? The answer to that is a gore filled yes.

My main concern for this film would be the cast chemistry not being the same 10 years later. Considering really a film like this is probably above the cast’s talents considering Emma Stone is now and Oscar winner and Eisenberg and Harrelson both with nominations. Luckily as soon as the film starts you know everything is exactly as it was 10 years ago, this group are still a blast to hang out with, bickering, insults and genuinely great and not cheesy believable romantic and dramatic moments between them. Eisenberg is still our reliable narrator, Harrelson is still filled with gun-infatuated insanity, Stone is clearly having a blast being cunning, beautiful and badass and Breslin is great as the rebellious young adult Little Rock. The new characters also are welcome. I really thought typical ‘dumb blonde’ stereotype Madison (Zoey Deutch) would be annoying, however she is a riot, Deutch’s over the top accent and well timed delivery and mannerisms are great and the writers know how to utilise her character correctly. Rosario Dawson is awesome as Nevada, she has really cool moments and lines and I wish she was in the film more. The only real weaker characters are the two ‘doppelgänger’ characters of Columbus & Tallahassee who don’t really add anything to the story or have much to do (even though they are still funny) and Berkeley who Little Rock runs off with, literally has no personality aside from ‘hippie/stoner’, at one point I did at genuinely forget about that subplot because of how much fun it was watching the other characters.

All of these characters working together and bouncing their lines and off one another works very well and means their are far more hits than misses when it comes to the jokes and comedic moments. There are couple of weaker jokes e.g. an extended Uber joke and some repetitive insults however the majority land just right. There are some great callbacks to the first movie: more additions to Columbus’ rules and ‘Zombie Kill Of The Week’ now being ‘Zombie Kill Of The Year’ and you also really need to stay for post-credit sequence, which I wasn’t expecting at all, it is completely ridiculous but very funny.

Action-wise the film doesn’t disappoint either. The film once again opens with brutal slow-mo slaughter accompanied with Metallica. There are several creative and tense sequences with the inclusion of the new ‘T-800’ (Terminator) zombies and it’s cool to see how much more experienced the gang has become when it comes to zombie slaying. My favourite scene has to be a brilliantly choreographed brutal yet slapstick one-take house fight. Director Ruben Fleischer returns and clearly wanted to make the best sequel possible, there is a clear difference from the direction and action here compared to his last film ‘Venom’ from last year, possible interference from Sony could’ve been to do with the former but clearly Fleischer’s strength and creativity is with ‘Double Tap’. The film is slightly rushed at times throughout the 99 minute run time and some time jumps aren’t really explained. However the road trip structure and fast paced humour and action work very well for the film’s length.

‘Zombieland: Double Tap’ is exactly what I wanted from this sequel. A shotgun blast to the face of foul mouthed humour, a cast of characters that you’d genuinely want to hang out with if a zombie apocalypse ever occurred and plenty of zombie killing chaos. As the man says: ‘It’s time to nut up or shut up!.”