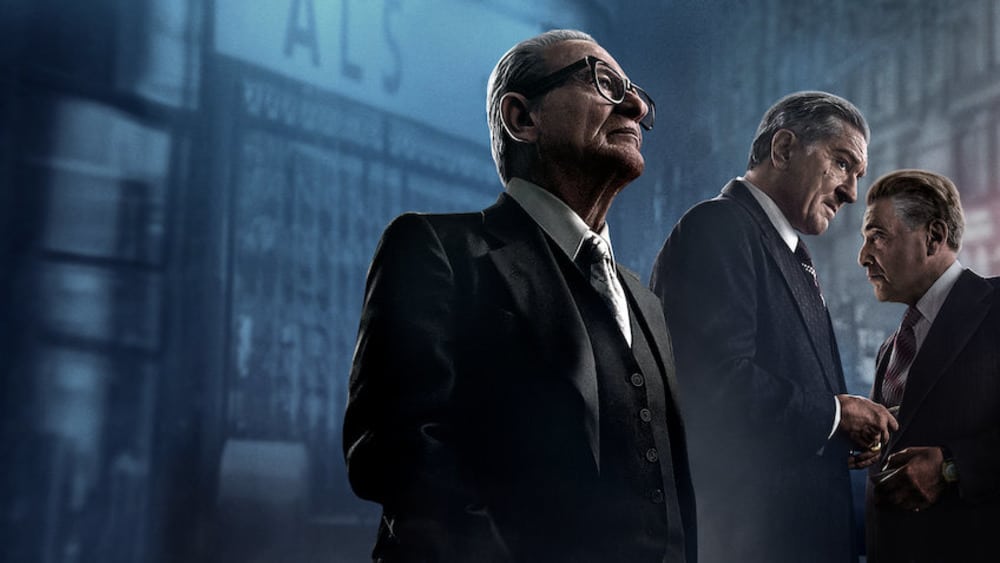 “I heard you paint houses?”

It’s finally here. A film that Scorsese has been developing since 2004, with constant setbacks due to other projects, unavailable actors and lack of interest to finance the film from various studios. However with the streaming behemoth Netflix allowing Scorsese free reign and budget over the project ‘The Irishman’ has released in cinemas (for a limited time and limited locations) before its released on Netflix at the end of the month. ‘The Irishman’ chronicles the post-war life of truck driver Frank Sheeran (Robert De Niro) who gets involved with Russell Bufalino (Joe Pesci) and his crime family. As Sheeran climbs the ranks to become a top hit man, he also goes to work for Jimmy Hoffa (Al Pacino), a powerful Teamster with ties to organised crime.

This film is a true epic, in its scale and variety of locations, to its time-spanning plot progression and its legendary three leads actors and director. The film plays out in a non-linear structure with an elderly De Niro being our narrator throughout, giving us information and context about various characters and events so that we are never lost in the proceedings. With a mammoth run time of 3 hours 30 minutes the film doesn’t leave anything out, it takes its time to really spend time with the characters and the various situations. It really draws you into this world and their lives, which make it consistently engaging regardless of what’s going on in the scene (which can involve anything from De Niro & Pesci) eating cereal and bowling with their families to bloody executions and car bombs).

It’s nothing short of incredible how well the film transitions from scene to scene, with the majority of these completely changing time period and location and that the coherence of the plot stays intact. Scorsese’s direction is (as expected) meticulously crafted, from the seamless opening one take camera movement, to the slow motion intense closeups and brutally swift nastiness of the various mob hits. The variety of editing and combination with the voice over works together perfectly e.g. when Frank is deciding and telling us which gun is best for a public hit. and when necessary there will be barely any cuts letting us linger on a character really digesting their emotion and taking in what has happened to them on screen or what will happen. The sound design for the gun shots is stabbing and deafening, with some gloriously bloody practical effect results and a memorable soundtrack to accompany several scenes throughout the film.

Probably the main aspect when it comes to the visuals of the film that was what people were really intrigued with witnessing is the de-ageing technology utilised on the cast. It is excellently implemented and only very rarely is noticeable and clearly where the budget went as at times it looks like they brought them back from the past and towards the latter half of the film fast forwarded to the future with some very realistic prosthetic’s and makeup. All of this was worth it with a cast ensemble for the ages. De Niro carries the bulk of the film as out narrator and main character. Seeing him rise through the ranks of the mob, whilst also trying to raise and support a family and dealing within the world of politics makes his character arc fascinating. There is some real emotional moments here as well, especially when it comes to the family of the character and De Niro really delivers here, whilst also bringing out that Taxi Driver, Goodfellas and Casino menace and intimidation. I still find it hard to believe that this is Pacino’s first collaboration with Scorsese, but what a first collaboration performance it is. Pacino steals basically every scene as Jimmy Hoffa, giving one of the most charismatic performances I’ve seen this year, with a razor sharp sense of humour and line delivery, to his obsession with ice cream and lateness and his relentless dedication to his cause Hoffa is one of the most interesting and memorable characters in Scorsese’s filmography and one of Pacino’s best performances. Also seeing Joe Pesci return to the screen after being retired is a treat for fans of his earlier work with Scorsese and just for any cinephile in general. Seeing him show that threatening spark of his Goodfellas days with a much more emotional edge and investment to the story. Here at times he gives a more quiet and subtle performance yet is always commanding with his screen presence and gives an aura of respect and intimidation. I mention ‘Goodfellas’ (because how can you not?) however this really isn’t like it at all in terms of its plot and characters, sure there are mob hits and violence, but only occasionally, no this is much more of a character study and life story than full blown gangster crime thriller. The supporting cast featuring, Stephen Graham, Jesse Plemons, Anna Paquin and many more, are also all interesting and get enough screen time to justify their presence and become interesting and memorable to the viewer.

‘The Irishman’ is nothing short of a masterpiece when it comes to its technical aspects, scope and scale, featuring some of the best performances of these actors already extremely impressive and lengthy careers and a film that you can see the investment and passion its director had when making it. Thrilling, sad, surprisingly and intentionally very funny at times, brutal and thoroughly engaging in its world building and characters. ‘The Irishman’ deserves to be seen on the big screen and I implore you to do so if you can, it really shouldn’t be just watched on a mobile phone like it soon will be. Go and support it, I guarantee you won’t be disappointed.