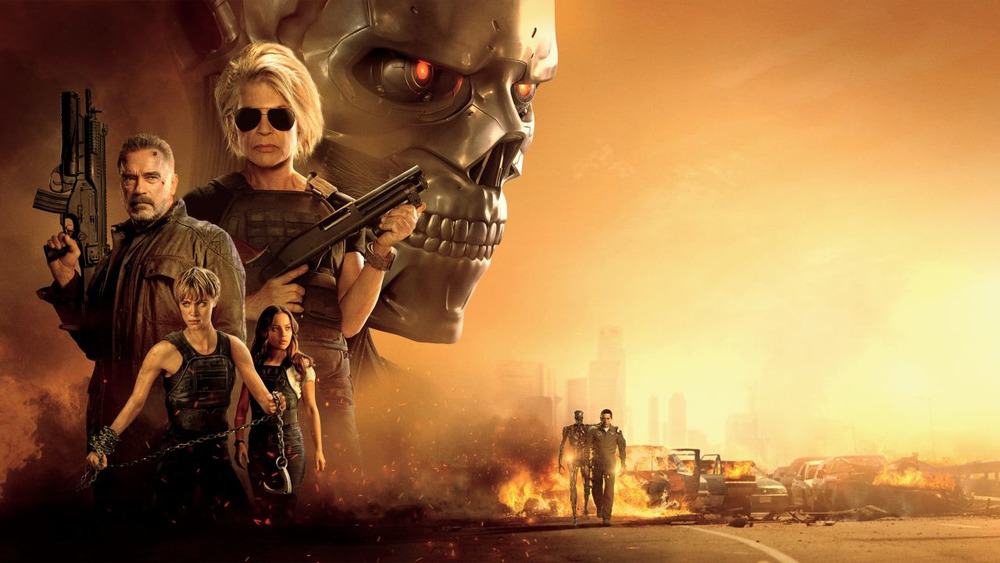 The sixth instalment of the ‘Terminator’ franchise and technically the third part 3 (‘Rise Of The Machines’ and ‘Genisys’ were also supposedly the direct sequels to ‘Judgement Day’) and sees the return of Sarah Connor (Linda Hamilton) as her and cyborg human hybrid (Mackenzie Davis) who have to protect a young woman (Natalia Reyes) from a newly modified Terminator from the future (Gabriel Luna) also with help from the original Terminator (Arnold Schwarzenegger).

Honestly the first trailer for this film really didn’t give me much hope, it looked cheap and generic and didn’t seem to look like it would live up to the legacy of the franchise. However the second trailer was a definite improvement and I had faith in Tim Miller (Deadpool) and James Cameron returning as producer/writer and the a definite R-rating to make it a worthy sequel and a good movie in its own right.

It definitely succeeds in some areas. If the cast weren’t as into the material or not having as much fun as they are here it wouldn’t be as entertaining as it is in some sections. It’s its awesome seeing Linda Hamilton return as Sarah Connor, she’s just as badass as she was back in 1991 and she clearly is giving it her all in the dramatic and action sequences and believed that this was the right story for her to return. She is rivalled by Mackenizie Davis who also is excellent here, especially in the action sequences, the augmented human idea in this universe is interesting. Natalia Reyes is also clearly giving her all here, however her character story and arc really isn’t interesting and is underdeveloped, coupled with the standard Terminator timeline messing about it’s just a bit confusing overall. Alongside Hamilton, Gabriel Luna is probably the highlight here as the new ‘Rev-9’ model, he doesn’t really have any dialogue so most of his screen presence and intimidation tactics are through facial expressions, he channels Robert Patrick’s T-1000 very well throughout. Schwarzenegger can literally play this role in his sleep by now, he still hits all the right beats and line delivery, at first his introduction is a bit strange and some people will be divided by it, he gets some good action and ‘throwback’ moments as well towards the finale of the film.

The action is mostly solid, the film charges into the action immediately with a great hand to hand combat sequence and car chase. Miller clearly is better suited to directing grounded action and also with budget limitations that would’ve been smarter. The plane and dam sequences are a bit messy and generic, however the final battle (again hand-to-hand combat) is awesome and well choreographed. Despite boasting the return to an R-rating the action is a disappointing when it comes to the blood and gore department which I feel (as in any case) would’ve added more intensity to the fights. The CGI is very hit and miss, the liquid Terminator effects are impressive and creative and reminded me of the ‘Venom’ symbiote in its design. The flash-forward sections are impressive in their visual style as well and capture the essence of the future sections in the first movie well. However when the CGI is bad, it’s bad, a lot of the action doesn’t have as much impact or weight to it due to it essentially being video game characters punching each other and there’s some very obvious background green screen in some scenes.

The pacing and plot structure of the film is also an issue. Its a very familiar plot and the stop-start structure does get repetitive. There is some serious slow down at the end of the first action sequences and its essentially just exposition dumping after that. The dialogue isn’t great at times, with the usual cheesy and generic moments for characters that you barely know. Also this film was heralded as a return to the more dark and gritty tone of the first movie and some of the second, however there’s lashings of hit or miss comedy when Arnold’s Terminator is introduced which doesn’t always work.

This is the best since ‘Terminator 2’, however when you think about it, that’s not saying much. However it is an entertaining ride to watch and there are some genuinely great moments, strong performances and some good action scenes. However you can’t escape the fact that it really isn’t a patch on the first two, the lack of brutality and blood and gore does hinder the fights, some patchy CGI and a generic plot with some poor pacing at times also doesn’t help. I think we should probably accept nothing will live up to the first two classics.