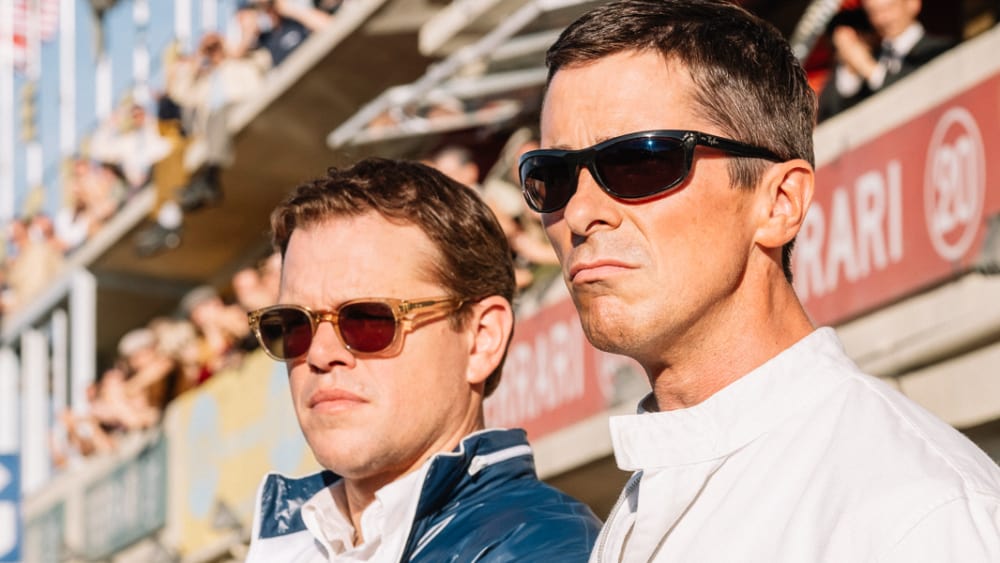 ‘Ford V Ferrari’ (or ‘Le Mans ’66’ as it’s called here in the UK) and follows American car designer Carroll Shelby (Matt Damon) and driver Ken Miles (Christian Bale) battle corporate interference, the laws of physics and their own personal lives to build a race car for Ford and challenge Ferrari at the 24 hour race in Le Mans in 1966.

This was one of my most anticipated films for the rest of the year, it has an excellent cast and director James Mangold has reliable track record. When it comes to the actual premise of the film and its main focus I have a very limited knowledge of cars (outside of watching ‘Top Gear’ and ‘The Grand Tour’…) and I knew of the event itself just not the specific details. However that doesn’t matter here. The film’s script is very well written and gives the viewer all the information they need to become invested within the characters and plot and it doesn’t go overboard on the car and mechanic terminology, yet also provides enough knowledge on the subject to be engaging and interesting for the viewer to learn. The film has a long run time of just over 2 hours 30 minutes and doesn’t feel like it, there’s a few pacing issues and some scenes could possibly have been a bit shorter, but nothing that seriously hinders the movie.

The characters are also well written and the performances are brilliant all round. Damon plays Carroll Shelby, after a car accident he has had to have been sidelined from racing and now manages his own company and race team, this is a character with a lot of dimensions, he wants to really remain to true to the sport and working with cars, but also is tempted and drawn in by the commercial and corporation money driven and successful side of the business as well, and their are some great scenes with him trying to work it out on both sides and deciding what is the best thing to do. Christian Bale once again completely invests himself in the role of Ken Miles, once again losing weight (which is still impressive and crazy to see considering the amount he gained for his role in ‘Vice’ last year) and changes his accent. Miles is one of the most likeable characters I’ve see on screen this year and once again Bale adds another great character to his filmography, his optimism and dedication to the sport and cars is infectious. He and Damon have brilliant chemistry and their friendship feels very genuine and the best this year alongside Di Caprio & Pitt in ‘Once Upon A Time… In Hollywood’. Even the main supporting cast and characters are interesting and memorable, Miles’ family have good chemistry together and there are some very impactful emotional moments throughout. Jon Bernthal and Josh Lucas are good as the two higher ups at Ford. Bernthal plays the more morally centred of the two and Lucas is the cynical and all money focused of the two. Tracy Letts is brilliant as Henry Ford II, he has a commanding and serious screen presence yet also provides possibly the film’s funniest moment.

Visually and technically the film is excellent. I highly recommend seeing this on the big screen just for the race sequences alone, they are phenomenal, especially the final Le Mans sequence, it’s really tense edge of your seat stuff, you feel every impact of the car crashes, the sense of speed is excellently brought to the forefront with brilliant cinematography and editing and impressive practical effects and stunt work blended with CGI (occasionally the CGI is slightly obvious but very rarely). Also the sound design is perfect, when these racing scenes occur the roar of the engines and screeching of brakes and tires is staggering and extremely effective. Seeing this on the IMAX screen will be an absolute blast for these sections I guarantee you. The film’s soundtrack features some fitting classic rock tunes which work really well with the racing scenes.

‘Ford V Ferrari/Le Mans ’66’ is an excellent and interesting biography movie featuring some brilliant performances, thrilling race sequences and engaging and investing dramatic and emotional moments. Definitely in my top 10 of this year. Highly recommended.