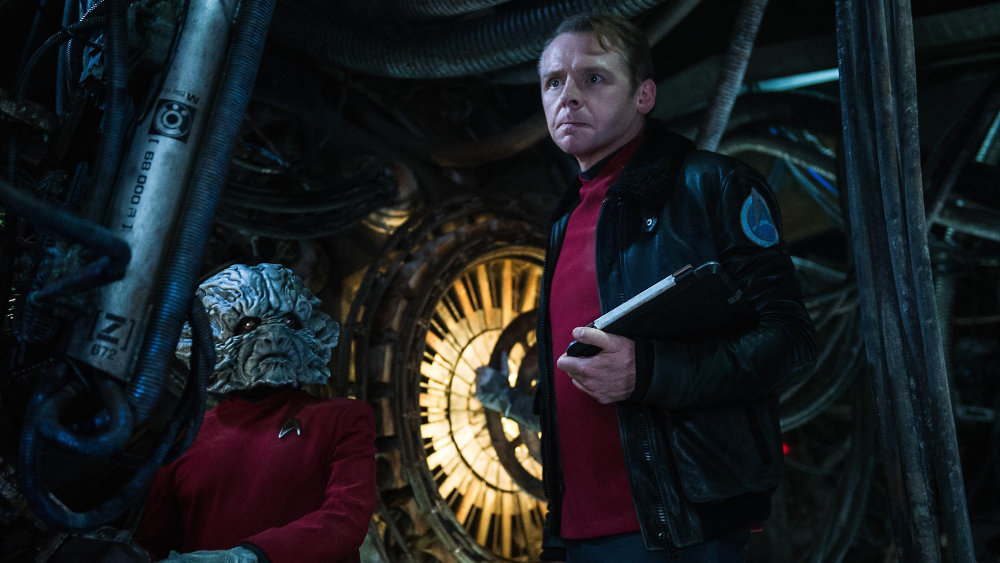 Simon Pegg has been chatting about Star Trek this week with the folks over at Collider and, as a fan himself, said what many have been thinking for quite a while now with the state of play regarding blockbuster movies over the past decade.

Pegg, who along with Doug Jung, penned the script for 2016's Star Trek Beyond, as well as playing the iconic role of Montgomery "Scotty" Scott, highlighted that Star Trek is not Marvel, it's not mainstream, we'll add it's not Star Wars. It's its own thing entirely, a fantastic franchise but a "niche" one.

"The fact is, the appeal of Star Trek is slightly more niche than the appeal of, say, the Marvel movies, which make huge amounts of money, and have this really, really broad appeal and they do very well. I think Star Trek is just a little bit more niche, so it isn’t gonna hit those kind of numbers. So yes, the obvious thing to do would be to not go for that massive spectacle, go for something a little bit more restrained in the vein of the original series. Yes, that would be a brilliant thing to do, and I’m sure it probably has been discussed… You specialize a little bit more."

Star Trek Beyond (2016) was a commercial failure, only generating $343.5 million at the global box office. Which, on its own isn't a terrible figure and isn't far from the $386.8 million pulled in by J.J. Abrams' successful reboot Star Trek (2009). However, with a production budget of $185 million, not accounting for any marketing costs, it's far from where Paramount wanted the box office to be with the third entry into the Kelvin Timeline series of films.

Summer blockbusters are a heavy investment for the studios that back them and $343.5 million against a $185 million production budget plus the cost of marketing, minus the cut the exhibitors take, leaves little return on such a large investment. But, this is the nature of the game these days. If a studio wants their IPs to go toe-to-toe with MCU spectaculars they have to go big, yet, that's a massive risk financially and, let's be honest, Star Trek has never been able to pull in the audience on a scale like it's oldest rival Star Wars - or Marvel Studios' films - that's why, traditionally, the productions were kept sensible.

Looking back at the '90s TNG on film era, the production budget for the epic Star Trek: First Contact, was $46 million. Even adjusted for inflation that comes in at approximately $75 million. Had Beyond come with a price tag around $75 - $90 million, then $343.5 million back at the box office would be a fair result and the franchise would probably be moving forward on film. But, when the productions start to require in the region of $450 million to just break even, that's just not sustainable for Trek, regardless of the competition. The most successful Star Trek motion picture at the box office - not adjusted for inflation - was 2013's Star Trek Into Darkness, which grossed $467.3 million against a production budget (not including marketing spend) of $190 million, so just about scrapped a profit theatrically. Of course, studios can get more back on home release, merchandise, tie-ins etc. but that should be more like bonus money, not what's needed for a film to wash its face.

With the current cost of big screen spectaculars, the maths just don't stack up for Trek, not unless the franchise takes a leaf out of the past, and recent mid-budget success stories, and goes smaller and deeper, exchanging MCU level action for more traditional Wrath of Khan storytelling.

Pegg went on to say to Collider, discussing the future of Trek;

"Maybe TV is a better place for [Star Trek] now. Television has evolved so much. It’s become something which is very much a contemporary, a peer of cinema. It’s simply viewed in a different way. It isn’t a reduced scope anymore. You can still do masses of interesting things, and it can still look modern and not inexpensive. Maybe television is a better format for Star Trek. That’s where it started, you know."

Which is true. Love them or hate them, Discovery & Picard didn't scrimp on their productions. Now, whether that is sustainable long-term is also up for debate and those shows look like big screen blockbusters as CBS uses them to drive subscriptions for All Access, so currently seems very willing to spend big.  Either way, with Star Trek: Strange New Worlds on its way, plus, new seasons of Discovery & Picard, it seems Trek's voyages will be on the small screen for the foreseeable future.