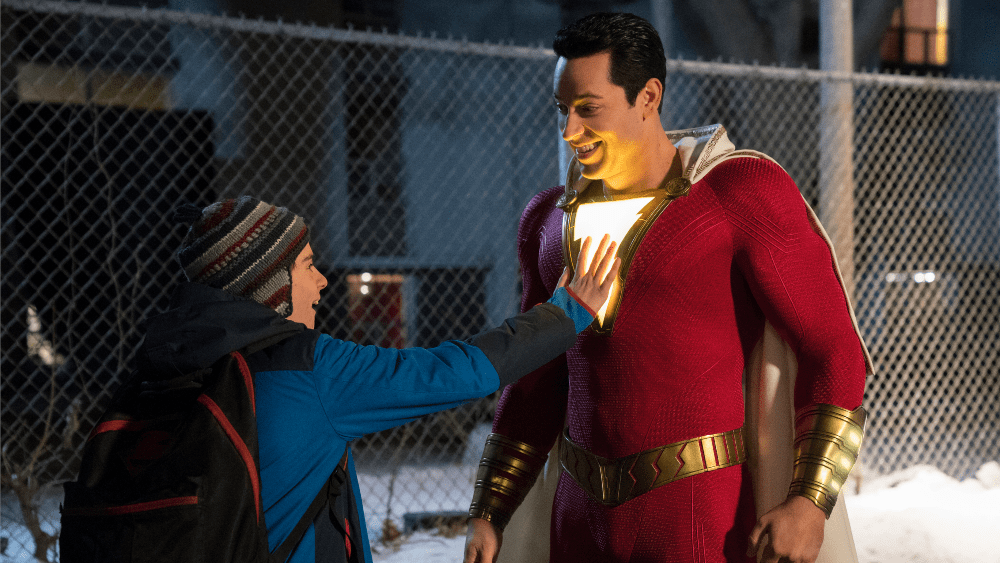 David F. Sandberg, the director behind 'Lights Out' and 'Annabelle: Creation', enters the DC Universe with his biggest movie to date, 'Shazam!'. Since the finale to Christopher Nolan's the 'Dark Knight Trilogy', DC on film has been a mixed bag, how did 'Shazam!' stack up? Well, it's a solid fun watch filled with energy, passion, heart and most of all charm... plus as oodles of cheese and camp. Much like 'Deadpool' with Ryan Reynolds, it feels like Zachary Levi was born to play this role.

Full review below, but first. As usual, we opened a review poll in the group and over the last few days, members have been rating the film out of 5 and leaving comments to express their views on the film.

Join the group and get to take part!

'Shazam!' is one of those movies that arrives at the right time during any dominant genre's life-cycle. As previously mentioned, the parallels with 'Deadpool' are clear, the film is a much a superhero origin flick in its own right as it is a loving parody of the genre - 'Deadpool' for kids, really. With the epic and monumental 'Endgame' on the horizon, it was a delight to get a simple blast from the past type hero film with low stakes, plenty of cheesy comedy, nods and winks to the DC universe and most of a film that had no other goal in mind other than to entertain. In some way, it really knew that to stand tall in a crowded market, it almost had to be small. Yeah, there's a bad guy and the world is kind of in danger should 'Billy' not find his inner hero and save the day, but at no point is the tight story about a kid finding his place in the world and the love of a family ever pushed to one side to force in an end of the world scenario for the sake of an "epic" action sequence; even the film's climax is kept tight and on point.

Zachary Levi absolutely shines as the titular hero, he's energetic, charismatic and is 100% convincing as a child in an adults body. However, there is some juxtaposition between Levi's performance as 'Shazam!' and Asher Angel's 'Billy Batson'. 'Billy', while initially presented as a bit of a 'Carey Mahoney' type scamp, is rather serious and indifferent, snarky at points, towards his surrounding, whereas 'Shazam!' is pure energy and it works so well if you view it as the sudden power fantasy he is living, if not, it would seem odd that there are two distinct personalities at play much of the time. Yet, let's be real, if anyone was a kid, be they timid, dour, pessimistic, being able to say the word "SHAZAM!" and turning into magic 'Superman' would certainly put them on a high, one that may lead to arrogance... which it does.

Aside from Levi's knock-out performance, I felt the real show-stealer here was Jack Dylan Grazer as 'Freddy Freeman'. He was the embodiment of a comic book, superhero fan and brought so much to the table. He was quippy, quirky, pulled off the drama and feels well, fantastic performance from a young actor. What was even more surprising, was just how well Adam Brody delivered his performance during the climax... which I won't go into due to potential spoilers as there was a lot of cool things left out of every trailer. The rest of the cast were on form, doing everything they needed to with boundless energy and heart. 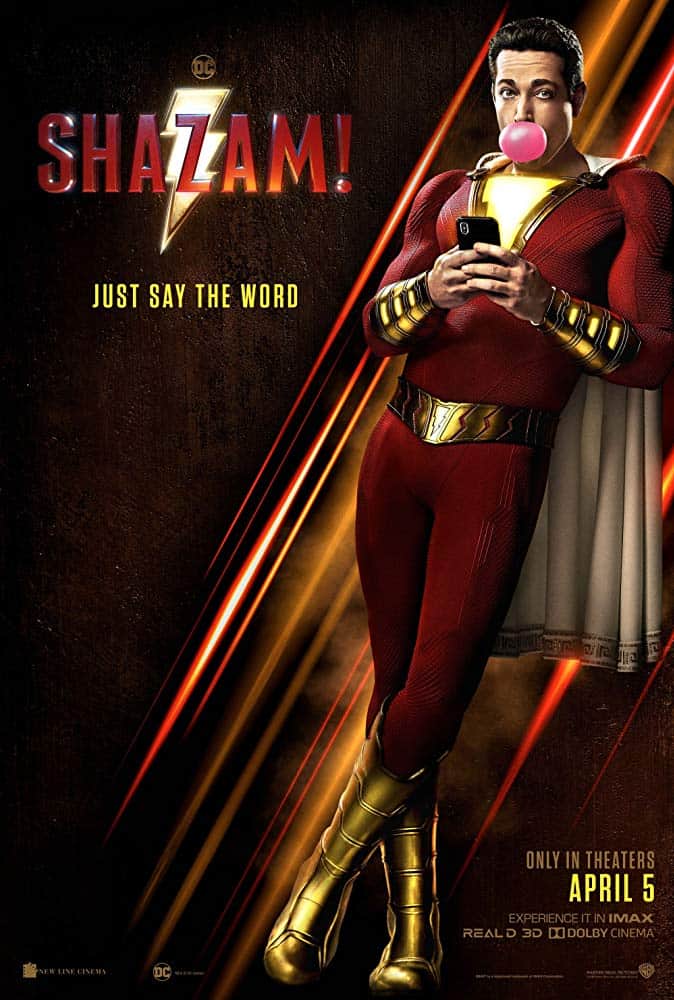 I don't really want to just outline the story, as that's not so much a review, more a description, so going to burn through what worked and what didn't work.

The theme of family, coming of age, responsibility and the drama works, balancing out the comedy so it doesn't feel like a spoof.

There were a couple of moments when characters said things that they wouldn't of known unless I missed a line prior to those statements, but anything can be nitpicked... moving on.

As a villain, 'Dr. Thaddeus Sivana' (Mark Strong) works and doesn't at the same time. His motivation is pretty cliched, his role is reduced to a cliche but then again, that's why it also works. He's what a kid would think of when describing a supervillain. In any other film, the throwback nature of 'Sivana' would be a puncture that would slowly deflate the movie, but in 'Shazam!' his single-mindedness, emphasis on villain monologues even if no one can hear him is perfect for the superhero version of 'Big': a classic '80s style villain for an '80s style movie. The film is based heavily on Geoff Johns' The New 52 'Shazam!'. The adaptations of the characters work perfectly, but it's a bit disappointing that the 'Sins' were horror creatures, but looking back at the comics, had they go the direct route, it could have looked very 'R.I.P.D.'. 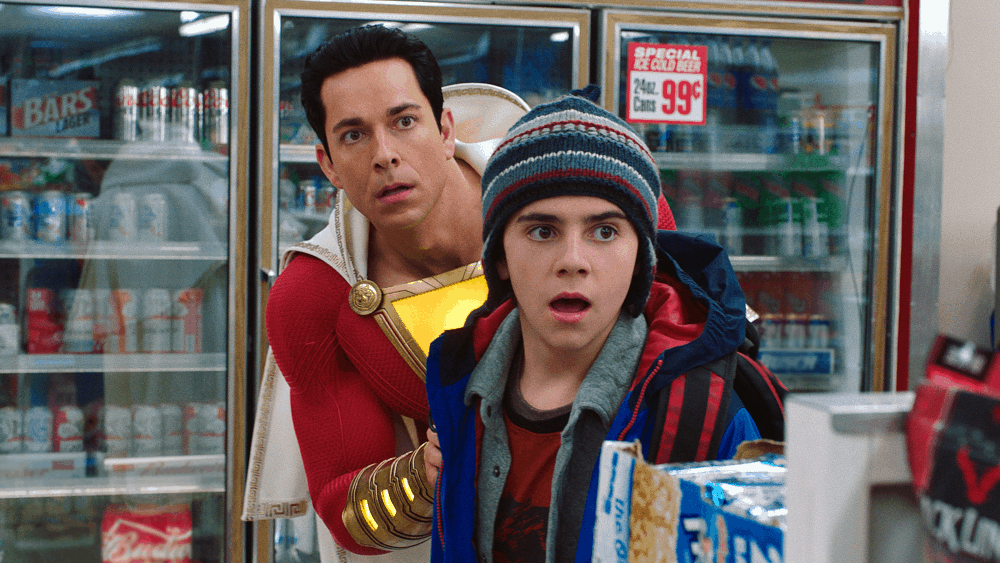 Yeah, everyone has said it already and the trailers made it clear that this was 'Big' but with a DC hero, not that the hero was changed to fit into the big model, no, that was the clever part. DC has produced a self-contained genre flick that pays homage to a classic '80s comedy (there's a pitch-perfect 'Big' reference during a fight in a mall) because it made perfect sense for a character who is a kid with the power to become an adult superhero. But beyond 'Big', there's such an '80s vibe to the film as it oozes with vibes of 'The Goonies', 'Labyrinth' and others, especially in the sense that it's not frightened to shy away from potentially scaring kids, and with a director like Sandberg, the horror elements land. On top of this, there are endless nods to classic golden age comics, in-jokes, references to 'Rocky', it's chocker.

Going forward, would I like to see more, yeah, but maybe only one more - depending on the stories they can come up with - as the core of the film really was the coming to terms with suddenly having superpowers and the conflict between 'Billy' and 'Freddy' that arose due to 'Billy' shirking the great responsibility that comes with great powers - note for note almost the way 'Josh' and 'Billy' fall out in 'Big' (1988) but twisted. In that film, 'Josh' takes his grown-up role to seriously by the end of the second act, whereas in 'Shazam!', 'Billy Batson' is treating the gifts bestowed upon him like a gimmicky talent.

If DC is going to continue to make self-contained genre flicks featuring their pantheon of characters, good times. Even had 'Justice League' been good, let's be fair, a team fighting a big bad, fate of the world and universe, it's the same stuff as the MCU just different characters. 'Shazam!' showed, once again, that these smaller comic book movies - 'Deadpool', 'Logan' - can deliver.